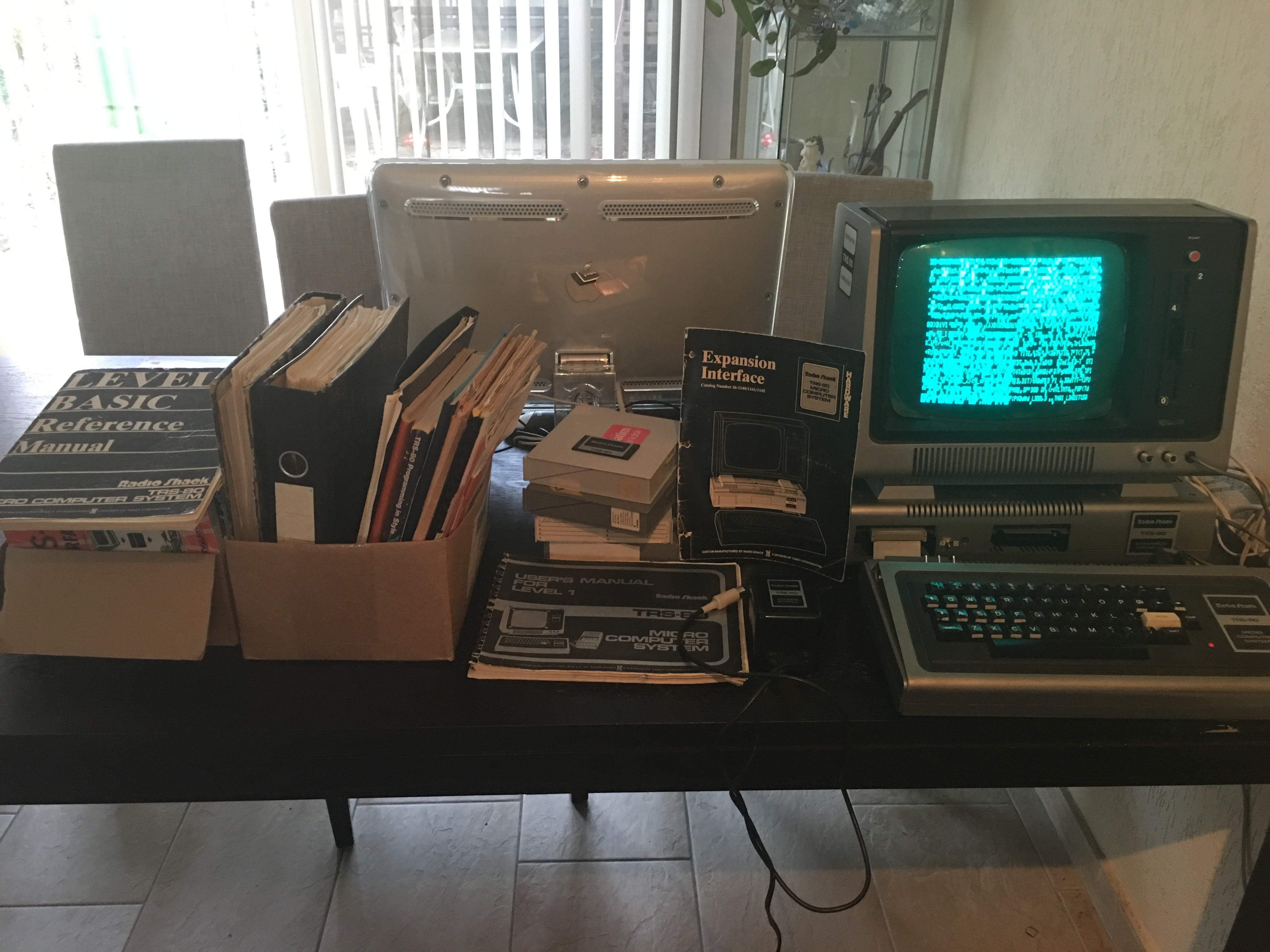 In my previous post, I still owned a beautiful Amiga 4000T. For several practical reasons, I decided to sell this beauty to another Amiga-fan and got myself a “Next Gen” Amiga, an AmigaOne.

AmigaOne is originally made by Eyetech as a project for Amiga1200 and Amiga4000 to upgrade a CPU using the original Custom Chips. Because of hardware issues, they’ve cancelled the project in 2001. In 2002 they restarted it as becoming a whole new machine and the AmigaOne was born. Started in 2002 with the AmigaOne SE and followed up in 2003 by AmigaOne XE.

The one I got is an AmigaOne Micro-A1 – C. It consists of a 800MHz G4 CPU connected to a Mini-ITX mainboard where the videochip (ATI Radeon 7000 AGP) is integrated on the mainboard. Where the first 2 models AmigaOne (SE and XE) had heat issues and were generally unstable, the 3rd model from 2004 fixed this issue. It’s only made as a mainboard, so no official cases. It originally came with 256MB PC133 RAM.

I found a whole system in a really small case (I believe it’s a Dell case) for a reasonable amount of money.  This was the last board made by Eyetech and the last AmigaOne until 2011 when the AmigaOne 500 (Acube systems) and AmigaOne X1000 (A-EON) were introduced in a small amount.

While AmigaOne was made, there had to be another system. AmigaOS 3.9 is made for the Motorola 68000-series CPU while AmigaOne’s had a blazing fast G3 PPC cpu. Back in 2001, Hyperion Entertainment was asked by Amiga Inc. to produce a native PPC AmigaOS. AmigaOS 4.0 was born.

After a small upgrade from 256MB to 512MB RAM I created some photo’s yesterday of my running microA1-C with AmigaOS 4.1 update 5.

This is how it looks while the machine is booting the latest AmigaOS:

Smart people do see a difference in screen. Yes, left picture is made when I attached a Philips 19″ to it, but the screen broke down so I had to attach an older, but better Belinea 17″.

So, then it’s booted up.. It shows the following screen:

Having a working Internet connection, I could even go to Youtube using Timberwolf (=Firefox for Amiga). Timberwolf is still in alpha release, so really really slow. Lucky AmigaOS has another browser called OWB which is based on the Webkit engine and is workable (shown below on the right)

Using the E-AEU emulator (which is convenient added to AmigaOS 4.1) I can even run old Amiga games (E-UAE starts up an emulating layer which starts up WorkBench 3.1 and with that WHDLoad and finally the game, all within a few seconds!)

Below left is the E-UAE emulator running. Right is Superfrog running using this emulator:

Obviously, you can run more! See DirectoryOpus 4 (PPC version) and a MOD/IT player which is an Impulse Tracker called SchismTracker (also available for Linux, Windows and Mac).

You probably wonder if there’s anything useful to do with a 2004 AmigaOne? Of course, next to running old games, listening to music modules and doing webbrowsing, there are loads of free software made for AmigaOS including things like a SSH client (below left) or nice graphic effects (while dragging for example) when showing off what a almost 10 year old machine is capable of doing.

Ofcourse, I do understand all the latest operating systems are working faster/better (though starting up AmigaOS 4.1 only takes a few seconds) and it will never be mainstream. It’s just good to have a choice and great to see a company created in 1985, died multiple times and still continue to make new and beautiful things. Amiga is not just a computer, it’s a feeling only real Amiga-fans will understand.

It’s been a while since I’ve made a post here on blog.bartvandenakker.nl. It doesn’t made nothing happened in my life. Actually, a lot happened so the next few days I’ll post a few more stories. This post will be again about Amiga, like the last one .

A lot of happened with my Amiga’s. First of all, I cleaned a lot and sold the GVP A530 Turbo Card for I won’t use it. With the money got from that, I rebuild my Amiga 4000T to a ‘usable’ workstation.

First of all, a bit of cleaning was necessary, so the entire  Amiga needed to get “naked”.

With this, I could clean the front so it was as white as can be without using chemical stuff:

When everything was clean I put the Amiga back together and it was able to boot from the old SCSI harddisk. Notice the difference between the Amiga and it’s external CD-drive/SyQyest device:

So, the Amiga was clean and able to boot, but still not very usable. So, I decided to buy a CF-to-IDE device, a 2GB CF card and a network interface card for the hardware and AmigaOS 3.9 as operating system. Installing AmigaOS 3.9 on the CF was a piece of cake, it almost worked immediately. You may ask now, why not upgrade the AmigaOS 3.1 installation on the SCSI HD? Well, the harddisk sounds like it will die pretty soon and I’d like to have some of the original information on that harddisk. Who knows what it may contain and not visible. It took me an evening to figure out that a 68060 CPU won’t be able to boot AmigaOS 3.9 as it is. First I had to create a bootdisk using AmigaOS 3.1 and with that bootdisk (Rescue disk) I can boot up AmigaOS 3.9 and install it on the CF. In the end, I managed to get it working. Here’s a link to Youtube, made with an iPhone 4 so bare with me in quality: AmigaOS 3.9 booting

At that moment I had a booting Amiga with AmigaOS 3.9, but still no network. I bought one on Amibay and it took me a week to figure out, the guy sent another card. So, I spend a whole week getting a driver from a completely different network card to work with the one I received. My life became easier the moment I found out which network card I actually got (thanks to AmigaScene again 😉 ).

Amiga can go on the Internet now (using a 10Mbit ethernet card!) and apart from a decent browser, it’s kinda usable (IRC, Mail, FTP work flaweless). I’m going to try for the Samba client so I can actually use my network at home (and play millions of MOD-files 😉 ).

Because I was on AmigaScene a lot, I found out that in USA people are making a movie (Viva Amiga) about Amiga. Also the main filmmaker (Zach Weddington) was coming to the Netherlands (and Germany) to see how Amiga still exists here. I didn’t think too long and went there with my revived Amiga 4000T. It was truly an awesome party to be. Lot of Amiga fans and famous Dutch people who used to work with Amiga’s. For me the best part was, Mr. R.J. Mical was there as well. RJ Mical (website) is one of the original Amiga creators and basically invented the GUI of Amiga. Besides that, RJ is just an awesome guy. He had the time of his life and enjoyed the whole day (like everybody else did!)

Picture below is taken behind my Amiga4000T. You can see a part of the AmigaOS 3.9 screen my Amiga4000T is showing!

At the end of the day, I even got my Amiga 4000T autographed by one of the original Amiga creators. For the record, almost all Amiga’s ever made were at that day and my Amiga 4000T was the only 4000T which was around. Special moment for me!

He wrote: “Thank you for taking care of my baby” .

So, this is the current status of the Amiga. At June 16th this Amiga will be in Maarssen at the “Commodore GG dag” where it will be in the lineup of all Amiga’s ever made (and still working). For Amiga or Commodore fans, a place to be!